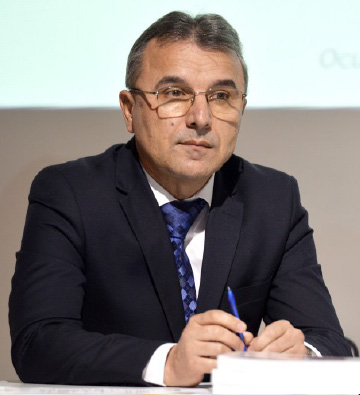 Real Time monitoring in Romania and beyond cross‐borders

The National Institute for Earth Physics (NIEP) operates a real-time seismic network designated to monitor seismic activity occured both in Romania and abroad. The seismicity in Romania is dominated by the intermediate-depth earthquakes of the Vrancea region, with hypocentral depths between 50 and 200 km.  The digital instrumental era of earthquake monitoring for Romania commenced with the improvement of its own real-time seismic network in 2002. Over the years specific improvements had been made enhancing earthquake monitoring capabilities, both in terms of the number and distribution of instruments and as well as their performance. At present NIEP operates a real time seismic network which includes over one hundred stations and two seismic arrays. Because of the current configuration which is dense and comprising a wide variety of sensors, earthquakes location and magnitude computation is no longer an issue. In order to monitor the earthquakes that occur in the seismic border areas, NIEP, in collaboration with the profile research institutes from Bulgaria and the Republic of Moldova, has installed on their territory small seismic networks in addition to the national ones.

NIEP has become a node of the European Integrated Data Archive (EIDA), with the task of archiving and making available  data from seismic networks in Eastern Europe.

With the advent of high-resolution GNSS systems, NIEP has completed its monitoring system with such a network. The GNSS network provides observations of crustal movements for improved analysis of surface – deep interconnections of medium-depth earthquakes, as well as advanced, rigorous and highly accurate measurements of weather conditions for weather forecasts, climate monitoring, seismic precursors (ionospheric studies), GPS positioning and navigation and other types of complementary research.

In order to better understand the peculiarities of the Vrancea seismic zone, NIEP set out to conduct multidisciplinary research on this area, for which it installed various geophysical equipment, including infrasound networks.Now, two infrasound networks are installed in  Romanian.